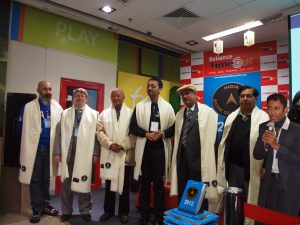 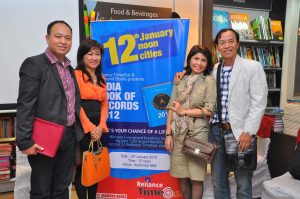 This insight further gave birth to a dire need of some documentation system to document the various strategies, various thesis, which lead to the achievement and setting of record. This paved the way for millions of new aspirants to follow the same track and become next record-holder. So it was quite evident that anyone who dares to dream of being a record holder can make his mark by simply following the guidelines and going through the set rules of the game to make it to the pinnacle and to be a record-holder.

For instance, the person who is the record-holder for memorizing the fastest is not born differently with any special inherent talent or a strong memory, rather he has followed certain set of methods, certain set of techniques, which he had undergone for a certain hours a day, certain days a week, certain weeks a month, and may be a certain months in a year if not certain years to make it happen. He has learned the skills, practiced them thoroughly and finally created a record to become a record holder. So anybody who is given this process, this technique or complete compilation can easily duplicate this record of memorizing the fastest. This task could be easily achieved by n number of persons in no time. This clearly implies that the record holder is rather a discoverer who discovered this special method, which makes him special and differentiates him from the rest of the community.

The hidden flaw felt here was that this special technique remains with the record holder only and that’s too till he is part of this world. The moment he kicks the bucket, the technique becomes a mystery for everyone. But at the same time if someone get this technique or method
jotted somewhere, recorded somewhere or better get it compiled into a thesis, then this entire process will go into the archive and will remain in the world till eternity and would keep on serving the mankind forever. So this thesis emerges out to be invariably important ingredient of this entire system to help many other people to duplicate the feat numerous times in the days to come.

In the backdrop of this brainstorming all the participants went back to their countries to explore the viability and the feasibility to practically formulate the concept of World Record University in their individual countries. In India this responsibility was shouldered to the India Book of Records. To initiate the World Record University the Chief-Editor of India Book of Records went to The University Grants commission (UGC) and to the Directorate of Education-New Delhi. He was made to understand that presently in our educational system there is no such concept of creating and establishing the records and this concept as such is out of their prerogative and prevents them from formulating any system or guidelines for it. This lead to an out-of- box thinking and encouraged the members of National Book of Records to follow the system, the way the Olympic Committee was formed years back, in the absence of any regulation available with any country to conduct sports globally. So, at that time, all the sports loving countries came together and formed an association which was named Olympics. In those olden days the representatives from the various participant countries formed a body and set the ball rolling which later on with the passage of the time kept on consolidating it-self and finally come to a level as we all it see today. This is the same Olympics which is today recognized as an accredited sports conducting body and is globally accepted.

Similarly is the case of Medical Association. The American Heart Association is neither associated nor affiliated to any university or Government body. And so is the case of the Judo association or the Taikwondo association. They are also not associated with any of the Government body as they are just out of their purview and is not the subject of their concern because of their inception stage. They are not associated either to UGC or to the Department of education. On the similar pattern, all the National Record Holder Festival-2013  participants decided to form an autonomous body to globally embody the structure and the system to document the methodologies used in achieving the records. This finally lead to the beginning of a new era and gave birth to The World Record University.

The final launch of the university was done on 23rd February 2013 in the presence of various participants of the Vietnam book of Records and India Book of Records. 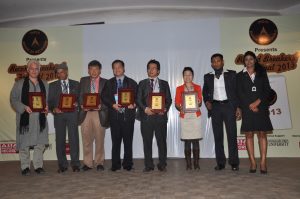 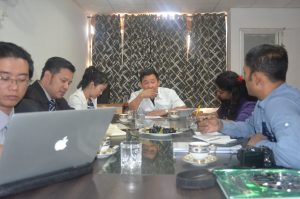 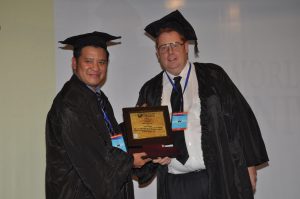 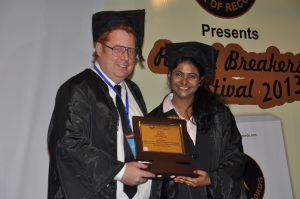 Any person who has done something distinct and is a record holder of the respective nation can be the applicant to apply for the Doctorate Degree. The second step is to compile the complete adopted system, the idea, the methodology, the resources, the skill set, the technology and the various ingredients involved in achieving that feat to become a record holder in black and white, so as to make it readily available for the new aspirants and the entire mankind to repeat the excellence one has achieved.

Once the application for the Doctorate Degree is submitted at the World Record University in the concerned nation, the same application would be forwarded to all the World record University branches in various nations along with their Head-office, to give their consent and
approval. Once the consent is received from at least three participating Chief-Editors, regarding the compilation that it is sufficient to let others achieve the same accomplishment by adopting the stated methodology and by following the given instructions in the thesis. Their approval will automatically entitle the record-holder to be honored with the Doctorate Degree & and titled as doctorate in that particular field. For instance, if someone has created a record in breaking a set of tiles in a definite number of strikes in a particular environment or breaking a number of canes in a stipulated time say one minute and has compiled the whole process so as to enable others to duplicate the same, he would be conferred with the Honorary degree of Doctorate in that particular subject, say breaking tiles or breaking canes in one minute. In short he would be honored for his Creation, his invention, his discovery and finally his compilation to serve the mankind. 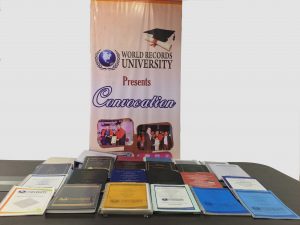 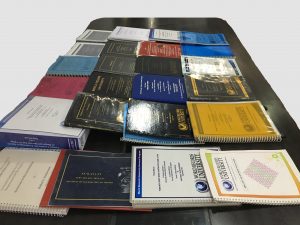 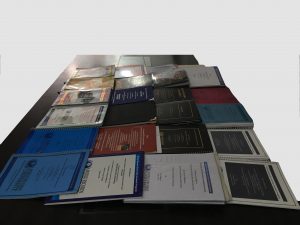 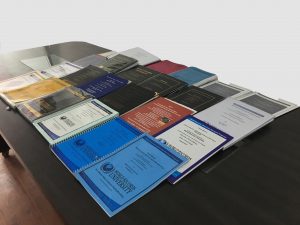 He is further honored to document all his techniques and to share his skill set with the entire world to let others get inspired enough to dare to repeat it or better supplant it.

The past convocation took place in three countries, namely in India in New Delhi, in Malaysia in Kulalumpur and in Vietnam in Ho Chi Minh city. The convocation in past years were graced by the former Honorable President of Vietnam, the world level celebrity and the well known football player-Maradona, the renowned Bollywood star-Karishma Kapoor, the senior most retired IAS officer Mr. Raj Rup Fuliya-former principal Secretary to Haryana Government, former Rajya Sabha member Mr. Mahesh Sharma and the former Minister of Science and Technology of Vietnam Government. In the gracious presence of above dignitaries the convocation was held and the degrees were conferred to all the record holders. 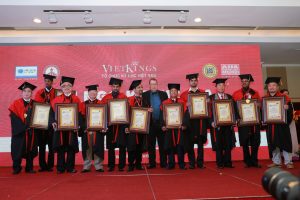 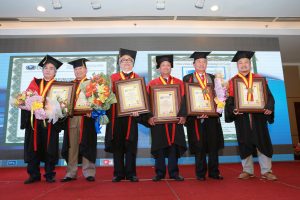 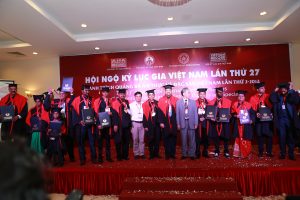 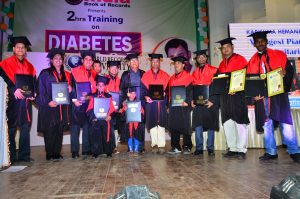 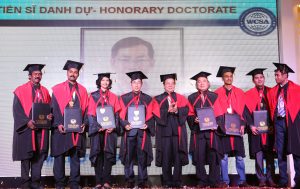 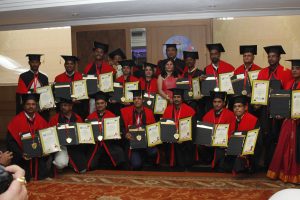 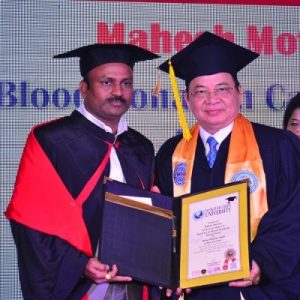 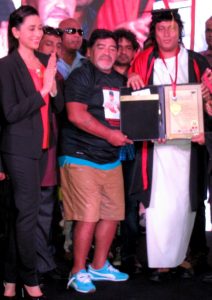 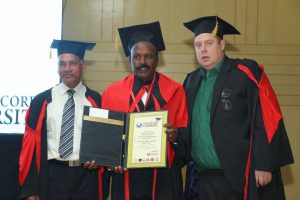 Along with the convocation a Bi-yearly publication of World Record University is published comprising of all the various new additions made and records achieved with their complete details and compiled documentation. 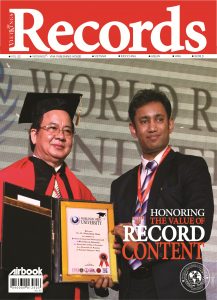 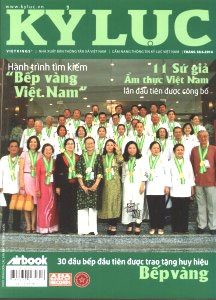 Fees Structure – The University follows a very competent fees structure to inspire lots of people to give all a fair chance to be a honored member of this prestigious legacy. The University believes in philanthropy and is ready to shoulder its social responsibility by providing 100% fees waiver to the deserving cases. The fees structure is deliberately kept very reasonable, inspiring and encouraging for the aspirants, so as not to let it become a hurdle in any way for the record holders. The fees structure rather encourages masses to be the member of the World Record University who are not even the record holder, but aspire to join the World Record University. So as during their journey to quench their thirst to be a member, they would also explore various fields where they can prove their mettle and become a record holder.
As a special case people below the poverty line as per their countries norms are entitled for 100% fees waiver. However, others who are not below the poverty line but have done something new, or something promising enough to help the mankind to a great extent to sort out some grave problems that has wreck havoc on the entire society, would be provided good scholarships and fees waivers depending on their accomplishments, their impact on the society and the record holders economical status. Remaining record holders would be charged with the same nominal fees as accepted and decided by all the members of the World Record University. The fees will be same in all the countries.

For availing the waiver the applicant has to apply to the national nodal centre of that particular nation, that would be the whole-sole authority to take a decision to this effect.

To Capture human excellence in such a way that it can be understood, recorded, documented and repeated by many others so as to let the bar raised every time and set a new record every now and then.

It has started with the vision that a human anatomy has enormous capacity and can easily achieve what it intends for, what it plans for. Like for instance, before 1954 it was presumed that the humans cannot run one mile in less than four minutes, so all the contenders attempted to achieve the task in four minutes and few seconds. But, Mr. Rodger Binister in 1954, supplant all records and break this myth. For the first time in history he finished one mile in less than four minutes and created history. Surprisingly and interestingly it was immediately reciprocated by 32 other aspirants in the same year, to be just followed by 200 more within next three years. This proves beyond doubt that the human body can stretch to new levels once intimated about the very possibility of the same. Its more of the mental barrier rather than the physical barrier for a human body to achieve an un-daunting task. As this theory is further corroborated by the fact that now a days even the students achieve one mile in less than four minutes in their regular school events.

This story lead to the establishment of Gunnies Book of World Records&quot; and the release of their first edition in 1955 to let others know the capacity of the human body and to overcome their mental barriers to be the next record holder. This in turn has further inspired The World Record University to go extra mile to compile the entire process blow by blow and to made it readily available to all the future aspirants to not only let them know about the new records, but to make them learn the basic science and the system working behind it. The principle is to let them understand and to let them get inspired enough to made an attempt to achieve it. This enables the entire world to try, practice, and simply copy the accomplishments of others. To let them all to just repeat the same excellence time after time and set new records in the coming future, even after the record holder himself has left this planet for his heavenly abode.

Disclaimer – The World Record University is not guided or controlled by either University Grant Commission or any other Government run body or aegis of any institution. It is an independent autonomous body formed by the national Chief-Editors of various nations as India, Nepal, Vietnam, Malaysia, Indo-China, Laos, Cambodia and many others.

2020 @copyright World Records University | All rights reserved. - All disputes are subject to Faridabad jurisdiction only.
Translate »